“…. everyone, whatever their background, gets access to music tuition. That's the idea." Bono/U2

Music Generation is Ireland’s National Music Education Programme that aims to transform the lives of children and young people through access to high quality performance music education in their locality. 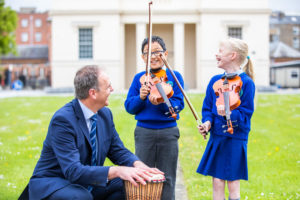 Initiated by Music Network ( co-funded by U2, The Ireland Funds, the Department of Education and Skills and Local Music Education Partnerships), Music Generation is now a key action within the Creative Youth Plan. 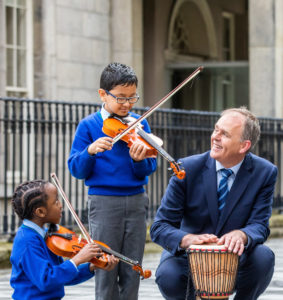 Under the Creative Ireland Programme, Music Generation is expanding to the remaining areas where Music Education Partnerships have not yet been established – this amounts to 9 new Partnerships being established, with 5 already set up in 2019 (Kerry, Kildare, Meath, Longford and Tipperary).

Locally, the programmes are managed by Music Education Partnerships, under the leadership of Music Development Officers.

Creative Ireland works to ensure that all Irish people have the opportunity to realise their full creative potential. We support creative programmes that inspire and transform people, places and communities through creativity.

All over the country, people are working together to transform their communities, their lives and their environment through creative projects supported by Creative Ireland.

The Creative Ireland Youth Plan programmes provide our young people with the opportunity to engage in creativity in both education and out-of-school settings.

Creative Ireland works to ensure that all Irish people have the opportunity to realise their full creative potential. Our creative projects inspire and transform people, places and communities through creativity.